Everyone laughed at the idea of a flying machine until the Wright brothers took flight in 1903. While we are definitely not the Wright brothers, we recognize that changing our current energy systems requires being willing to do things for the first time. Innovation is not constricted to Silicon Valley but includes changing the way we use market mechanisms and make investments.

In Our New Energy, we dare to do things differently. Holding excellent service at the core of our work, we always look for new ways to evolve the PPA market and serve our clients.

Today, almost six years after the birth of Our New Energy, we are happy to announce another ’first’ in market-parity transactions: The first 10-year PPA in Cyprus, as a deal between our partner, Svea Solar, and the local utility, Evergy.

This PPA covers the delivery of energy from a solar asset producing around 5 GWh/year of green electricity over ten years, displacing more than 1.500 tonnes of CO2.

In comparison, Cyprus currently has 335 MW of PV capacity installed. Where many other European countries have invested heavily in renewables, Cyprus is currently generating only 16% of its electricity via renewables while covering its electricity needs via oil and gas.

This reliance on oil and gas imports is felt by electricity consumers on the island and has sparked interest in greener energy investments. The country is aiming for a 26% share of renewables in gross final electricity consumption by 2030, but hopefully, this is a low bid.

The case is one of particular interest, as it proves the viability of renewable energy, even in the toughest of markets.

“Making PPAs a viable and scalable solution on a truly energetic island such as Cyprus, with an energy mix based on oil, and doing so without a properly liberalized market, makes this one of the most groundbreaking agreements in Europe.”

Innovation doesn’t happen in a lack of obstacles. It happens in friction, in headwinds. That is how we make the impossible possible.

“Through this transaction, we have closed a very important milestone for the strategic investment plan we have in Cyprus. While the reform of the Cypriot electricity market towards the EU target model is only expected during H1-2023, this agreement will allow us to start the production of our assets already in the coming weeks and navigate the regulatory uncertainty of a fast-evolving market”. – Pontus Skog, Head of Utility Project Development at Svea Solar.

With Southern Europe being a core geography for ONE’s energy transaction activities, we are looking forward to continuing our support of companies that push the boundaries of innovation in the energy transition. 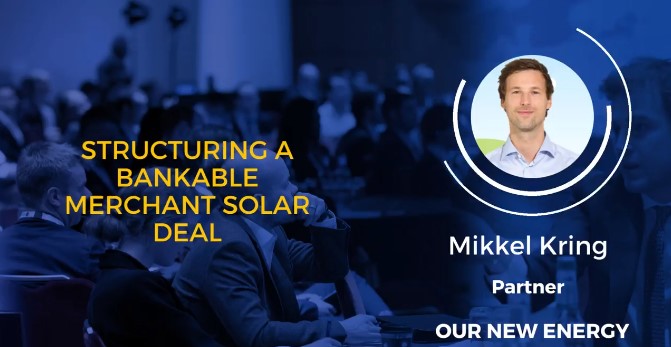 Mikkel Kring, Partner at Our New Energy is speaking at the 9th Annual Solar Finance & Investment...